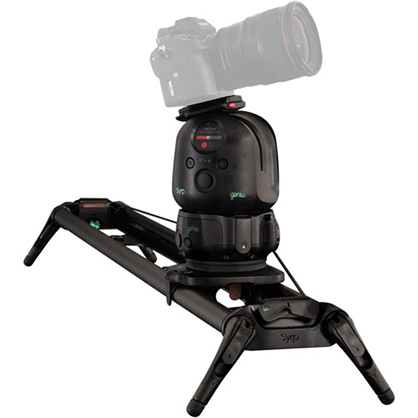 The system supports 11 pounds at up to 60 ø tilt when the slider track is horizontal. When used in a vertical orientation, the Genie II supports up to 5.51 pounds. It features a maximum panning speed of 25ø/s, with a maximum tilt speed of 11.25ø/s. In Video mode the battery has approximately eight hours of battery life, and while in time-lapse mode the battery will run the Genie II Epic Kit for about 12 hours.

Create sliding shots and time-lapses with dynamic pan and tilt movements using the Syrp Genie II Motorized Pan/Tilt Head. Set up basic shots using head's built-in software or create complex moves with keyframes and more using the redesigned control app on your smartphone. Joystick control is featured on both the head and the app, enabling you to easily set start and end points.

Utilizing the full 180ø of tilt, the Genie II head can support up to 7.9 pounds, and up to 12.3 pounds if only the middle 90ø are being used. Weighing just three pounds, this lightweight head is designed for portability. It snaps easily into the separately available Genie II Linear's integrated quick release system to create a 3-axis motion control head for your slider. Interface features include Bluetooth 4.2 Low Energy, 2.4 GHz Wi-Fi, and a color LCD display window.

A USB-C cable adapter is included for plugging in your camera for app-controlled shutter release and a quick release plate is included for securing your camera. A future app update will include functions like Bulb Ramping for day-to-night time-lapse exposure, Simple Setup, Live View, 360ø Time-Lapse, Multi-Row Panorama, and more.

Extremely portable with a weight of only three pounds

Add the Syrp Genie II Linear to your slider along with the included Genie rope, and you can enjoy motorized sliding for precise tracking shots and dynamic time-lapse sequences. The versatile Genie II is also compatible with nearly any third-party slider.

Features include reduced friction on the rope drive, a quick release camera plate for easy setup, keyframing with the Genie 2 app; and joystick, smartphone, and tablet control. Quiet operation and a compact portable design enable you to use the Genie II Linear almost anywhere your travel.

Attach the main unit to your slider's platform, and once the included Genie rope is threaded properly, the Genie II linear can automatically slide along the length of the rope. A smartphone connected via Bluetooth can control the Genie II Linear wirelessly, and when used with the Genie II Motorized Pan/Tilt Head, you can access 3 axes of motion to accomplish more advanced shots.