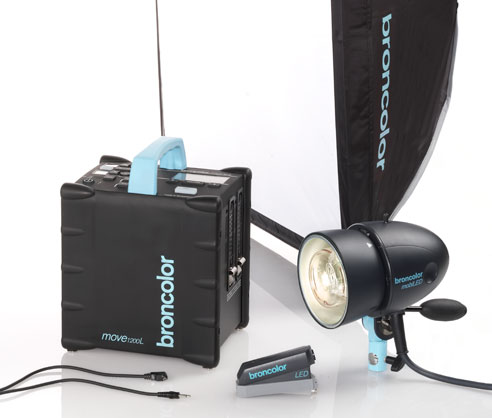 The Broncolor Move 1200 L Battery Power Pack with MobiLED Flash Head is built around the improved Move 1200 L battery powered pack. Broncolor continues to raise the bar that Broncolor itself has set so high as an industry leader. The familiar blue handle and modern design are about all that has remained from previous incarnations. Two outlets distribute 1,200W/s of flash power either symmetrically or asymmetrically over 9.0 full stops and is variable in either 1/10 stop or 1 stop increments. It gets it there fast too, in every photographic sense of the word. Recycling time is a super-fast 0.02 to 0.9 sec. (min/max) with action-stopping flash durations of 1/1,000 / 1/350 sec (t0.5 /t0.1) at full power and as short as 1/20,000 / 1/8,500 at minimum power. That means fleeting gestures and water droplets among other subjects frozen in mid air if desired. It's great for sports and dance in the field as well. Speaking of the field, the Move is aptly named. At only 13.7 lb it's lighter that its predecessor and uses an Li-FePo4 Lithium battery that gives you up to 230 full power flashes at full power and up to 50,000 pops at minimum power. You can even run the modeling light on your selected head for up to 2.0 hours thanks to the inclusion of a Continuous Light Adapter. You won't wear out this battery anytime soon either: it's rated for 4,000 recharge cycles.

Granted the Move is a great performer, but in the end it's what you see that count's isn't it? The Move clocks in at an ideal 5500K color temperature, maintained by proprietary Enhanced Color Temperature Control technology. With quality like this, tripping over sync cords is just not an option; The Move 1200 L's triggering options include optical, IR and radio slaves built into the unit. The Move has a radio range of at least 164' and depending on the circumstances, a possible 984'.