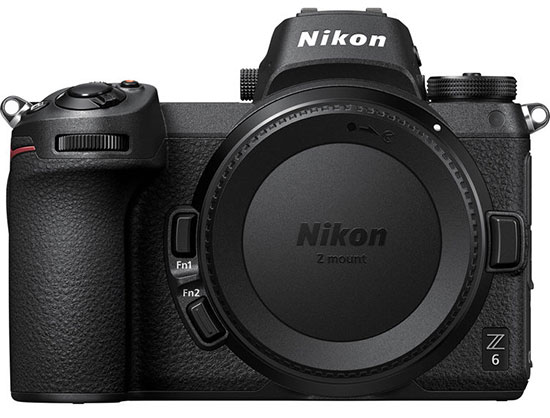 Part of Nikon's next step in their imaging journey, the Z6 Mirrorless Camera is positioned as the "all-arounder" within the new Z System. Beginning with the Z Mount itself, a large-diameter design with a short 16mm flange distance allows Nikon to create compact, yet powerful cameras and develop more advanced optics. The Z6 is among the first in the series, and features a high-performing FX-format 24.5MP BSI CMOS sensor and the EXPEED 6 Image Processing Engine delivering outstanding image quality and speed with a native sensitivity range of ISO 100-51200.

On the sensor you will find an advanced phase-detect autofocus system using 273 points covering 90% of the image area, and the sensor features 5-axis Vibration Reduction technology for stabilized photos and video regardless of the lens used. This advanced hybrid AF system will also benefit video. The Z6 features UHD 4K recording at up to 30p and can use the N-Log gamma profile along with the camera's 10-bit HDMI output to create cinema-quality video.

As with many mirrorless systems, the Z Series boasts a much more compact form factor than its DSLR counterparts. The Z6 is no exception with its slimmed down design and lighter build, though it maintains the weather sealing and ergonomics for which Nikon is known. The camera features multiple displays and screens for ease of use, including a 0.80x 3.6m-dot EVF with NIKKOR optics and a Fluorine coating, ensuring clear viewing. The rear of the camera is equipped with a 3.2" 2.1m-dot tilting touchscreen LCD while the top offers a dot-matrix OLED for quickly checking settings. For storage, the Z6 has a single XQD card slot that is compatible with CFexpress for faster speeds in the future. Additionally, the body is equipped with both Wi-Fi and Bluetooth.

Introducing the Z mount, Nikon's full-frame mirrorless system promises to deliver class-leading image quality and optics in a compact form factor. The Z mount itself makes much of this possible with a 17% larger inner diameter than the F mount, enabling the use of more advanced optics and lens designs, including ultra-fast f/0.95 options. For minimizing camera and lens size, the Z mount features a 65% shorter flange distance, measuring just 16mm, which allows for dramatically slimmed down body designs. The larger mount also supports faster and larger-volume communications between the body and lens to improve overall performance throughout the system.

A 24.5MP BSI CMOS sensor is used for all-around shooting, impressive low-light quality, and fast readout speeds to benefit continuous shooting, movies, and time-lapse recording. The back-illuminated design of the sensor affords noticeably cleaner high-sensitivity output for reduced noise when working at high ISO values, up to a native ISO 51200, as well as vivid and smooth quality at sensitivities as low as ISO 100. Benefitting the sensor is the apt EXPEED 6 image processor, which affords a wealth of speed throughout the camera system, including the ability to shoot continuously at 12 fps in raw.

Utilizing the sensor and processor attributes for more than just still imagery, the Z6 is also a more-than-capable multimedia camera. Video recording is possible at UHD 4K (3840 x 2160) using either the full-frame area or a DX crop area in 30p, 25, or 24p frame rates. Full HD 1080p video recording is also supported at up to 120p for slow motion playback, and video files can be saved to the in-camera memory cards or as an uncompressed file to an optional exter