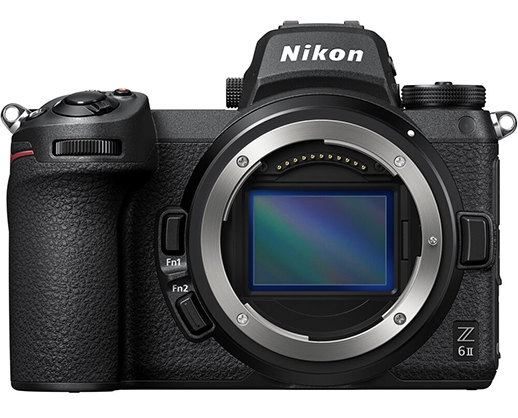 Revolving around a 24.5MP BSI CMOS sensor and dual EXPEED 6 image processors, the Z 6II is characterized by an increased buffer depth and faster continuous shooting rate, up to 14 fps with single-point AF or 12 fps shooting in other focusing modes. Video recording at UHD 4K 30p is possible, or up to FHD 120p for slow-motion output, and external recording gains 10-bit out along with N-Log and HLG (HDR) support. The sensor also suits working in a variety of lighting conditions, with sensitivity from ISO 100-51200, and in-body 5-axis Vibration Reduction reduces the appearance of camera shake for sharper handheld shooting. Additionally, the sensor also incorporates a 273-point phase-detection AF system, which now supports Eye-Detect AF in Wide-Area AF modes and during movie recording, and permits focusing in low-light down to -4.5 EV.

Balancing the imaging, the Z 6II retains its overall physical design, however it has been updated with a new dual memory card slot interface to hold one CFexpress Type B card and one SD UHS-II card for more flexible storage. Both a high-res 3.6m-dot OLED EVF and rear 3.2" 2.1m-dot tilting touchscreen LCD lend versatility to image composition and playback, and SnapBridge wireless connectivity can be used for remote camera control, image sharing to a mobile device, and even over-the-air firmware updates.

Improving upon their initial efforts, Nikon has revised the Z 6 platform to offer more speed, faster processing, and greater versatility without sacrificing the beloved qualities of the original camera.

Updated autofocus now includes Eye and Face Detection for both humans and animals in the Wide-Area AF mode, for both photo and video recording.

Timed long exposure shooting is now possible for up to 900 seconds (15 minutes) without the need of an external remote.

The rotation direction of the focus ring on lenses can be switched to suit one's familiarity.

Eligible for an optional ProRes RAW upgrade, enabling the camera to output ProRes RAW footage to a compatible Atomos external recorder. This upgrade provides greater color grading flexibility with the ProRes codec along with the ability to output uncompressed 12-bit raw footage over HDMI. This upgrade will be available in early 2021.

The SnapBridge wireless connectivity can be used to update the camera's firmware, instead of relying on a memory card-based system of updating.

Updated creative shooting modes include Multiple Exposure, 20 different Picture Control settings, and in-camera Timelapse recording. There is also a Focus Shift mode for recording up to 300 sequential frames with the focus position shifted between exposures for focus stacking applications.