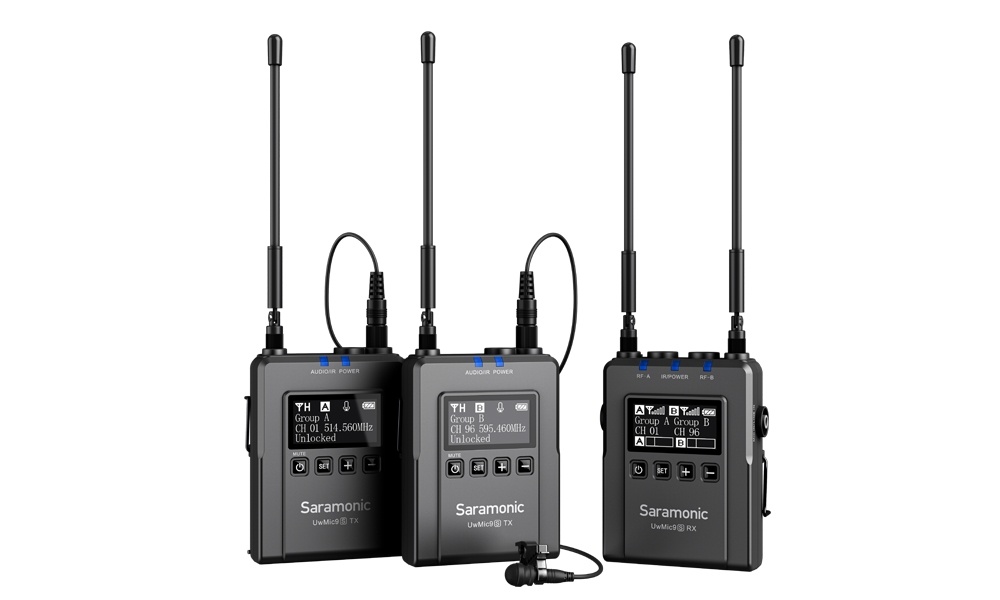 The Saramonic UwMic9S Kit2 Wireless Microphone System (TX+TX+RX) provides a premium 2-person wireless audio solution for broadcast&TV, ENG, filmmakers, vloggers, mobile journalists and content creators for a remarkable price. It is an easy-to use, high-quality and flexible UHF system. The external input allows the receiver to be connected to a mic or line level device such as a shotgun microphone, mixer, recorder or music player to capture additional sound or music. The system can be powered through its USB-C ports, allowing it to run for numerous hours on a USB-C 5V power bank. Key Features:

ON/OFF physical switches for group channel A and B

The Saramonic UwMic9s RX is a camera-mountable dual-channel UHF wireless receiver. It features wide switching RF bandwidth, a high-contrast OLED display and infrared and synchronisation between transmitter and receiver. The two detachable antennas can be rotated 360­Æ for better reception. The receiver­îs output can be toggled between mono and stereo modes and the low-cut function on the receiver minimises low-frequency rumble.

The Saramonic UwMic9S-TX9S is a mountable body-pack transmitter. It features an easy-to-read OLED display, a detachable antenna and built-in rechargeable battery. With the line input and mic input jack it can accept audio from the included 3.5mm locking lavalier mic or other line-level devices, a short press of the power button mutes the mic between takes. The locking function prevents the transmitter from being muted or turned off accidentally.